Greed is perhaps the most maligned human impulse. It is attributed the failure and fall of civilisation, the sum of all evils, and the modern dissapearance of spirituality. It is perhaps that which is said should be eliminated first, but seems to thrive the most.

Usually, the people who declare this have little understanding of the dynamics of greed, apart from simpleton insults of “money-grubbing”. Therefore, we should examine these dynamics, and see whenever greed is good or bad, and in which situations. Then we can declare that we have an informed opinion on the subject, instead of being idle babblers.

What, therefore, is greed ? It is defined as an excessive or eager desire, especially for material wealth.

This is already a problem, since we have no standard for excessiveness. We can say that someone is very wealthy, or very poor, because we compare them to averages. But desire for wealth can be excessive related to what ? What standard represents “normal” desire and “abnormal” desire ? Apart from psychological pathologies, we have no such standard.

There is nothing inherently wrong with someone pursuing material wealth eagerly, any more than there is for any other pursuit. Accordingly, what anti-greed advocates propose as the source of evil is that this pursuit destroys other people’s lives. What we must establish, then, is whenever greed does destroy people’s lives.

We are now forced to distinguish between general political alternatives. Because politics regulates the economy, and has a distinct effect on economical behaviour, we must separate our analysis in two parts : capitalism, and statism. Their nature and benefits are beyond the scope of this article : for a detailed analysis, please read Capitalism vs Statism.

In a statist system, the government wields political power. This power is manifested by the capacity to effect a number of attacks against property rights, including taxation, regulation, eminent domain seizures, and so on (labeled 2 on the graph).

How does this affect the perceived self-interest of the economical actors ? The greater the political power, the less advantageous voluntary means become. We can express this by a simple equation: 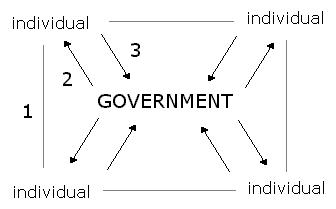 This equation regulates the disbalance between individual trade and political pressure (labeled 3 on the graph). The extreme situation would be communism, where trade is outlawed (T1 is still non-zero because of demand, which creates black markets, but T2 is extremely high) and the state regulates all production. In this kind of state, all action is necessarily political.

The more state power exists (P1), and the most favourable the political system is to pressure groups, electory bribes and media influence (P2), the more beneficial to the individual or corporate owner is political pressure. Thus we get monopoly trials incited by outdated rival corporations in order to topple a productive giant, we get subsidies and protectionism, we get social laws that censor a group of people in favour of another while mollifying individual responsability.

Instead of resolving situations to the interest of all parties, we defer to the immoral use of force by the state. In this sense, greed motivated by political power is evil, but exists because of the power structure inherent to corporatism (favouring corporate owners), syndicalism (favouring the workers) or socialism (favouring the state).

The counterpart to political action is individual action, which necessarily suffers (weaker lines labeled 1 on the graph). Private policing and trade organisations are relatively few in number and power. 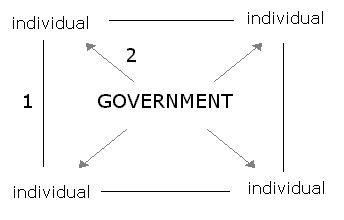 Examine now the reverse situation. If the state has no political power, and is only devoted to protecting individual rights, we have a situation of capitalism. In such a situation, P1 theoretically equals zero. I say theoretically because while it would be the ultimate goal of a liberterian system, this seems difficult to accomplish in practice. We may assume here that P1 is very small, without qualitative loss.

But if P1 is very small by definition, then the perceived self-interest of the economical actor will go towards trade. Thus we should observe a strenghtening of individual action (labeled 1 on the graph). The impulse of greed will necessarily be channeled towards voluntary trade with other people.

Since voluntary trade is necessarily to the perceived interest of all participants, such a situation is optimal. At best the government can only mimic such trade patterns : at worst, disrupt them completely. See the graph to the right.

The sole role of government is to protect individual rights from the use of force or fraud. This is accomplished internally by the actions of the police, the judiciary, and various regulatory institutions (weaker lines labeled 2 on the graph). These actions have as consequence to maintain T2 as low as possible, thru the well-accepted practice of prosecuting theft, fraud, and other such crimes. 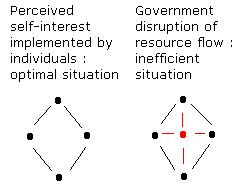 It seems, therefore, that we have two different outcomes. Greed in a statist environment is necessarily channeled towards political action, and subsequently the use of state force. Greed in a capitalist environment is necessarily channeled towards voluntary trade – in clear, serving the customer. Therefore we may appropriately say that there is good greed and bad greed.

An instance of this is the difference between corporate culture and government culture : for a corporation, the customer is always right, but for the government, the customer is always wrong. This is due to the source of their revenue. A corporation, in a capitalist system, is dependent on profits, which are dependent on customer choice. A government, in a statist system, is dependent on the fulfillment of political pressure for its revenues, not customer choice. This phenomenon also gives rise to an important principle in economics, the Tragedy of the Commons (the principle by which government property is necessarily guided by political motivation instead of private needs, and therefore is less apt to fulfill important functions such as the protection of the environment).

A number of objections can be raised to the underlying mechanism of free trade claimed to justify this analysis. Here I will examine the most important ones.

1. Your analysis of the optimal trade pattern being based solely on individual self-interest is wrong. There are such things as common goods, that affect everyone but that no one desires to support, such as the environment.
The premise of “common good” is, pardon the pun, common, but false. There is no such thing as common good. If something is worth being supported, then it will be supported – the state has no business forcing people to think otherwise, unless the use of force or fraud is involved.

2. People don’t know what’s good for them.
In a sense, this is true. In issues which do not affect people directly, people do tend not to be sufficiently informed and sufficiently aware to make good decisions, which is why democratic systems work so badly. However, we tend to be most close to our personal situations, and therefore we do know better about what’s good for us in private issues than anyone else.

3. Society requires organisation to survive.
This is absolutely true. But it is also not an argument against free trade, as opposed to statism. Government force is obviously not required for corporations or social organisations to exist.

4. The poor get poorer and the rich get richer.
In a system where trade is voluntary and predominently between private individuals, this is literally impossible. For example, selling a product implies that a customer benefits, and a number of workers benefit. The benefits are aways there, whenever a person is rich or poor. Statistics show that this is true quantitatively (for more information, see “La pauvreté érigée en système”).